KEN KNIGHT HAS BEEN FOUND! 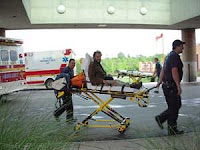 In a remarkable turn of events, missing hiker Ken Knight was just found and appears to be fine. More details to follow as they are known. From what we know now, he headed south from his last known point, ended up getting lost about 9 miles later after heading down the wrong trail, and ultimately lit a fire which drew in fire fighters who found him. He was lucid, but walked out on his own. In the end, he was only 200-300 yards from the road. He had ripped his pants, was dehydrated and hungry, but was otherwise in good health. As of this evening, he has already been dismissed from the hospital and is likely knee deep in his third stack of pancakes at the local IHOP.

That's great news. I've been following the story on various forums and in the news. As a SAR volunteer myself, I get really wrapped up in these searches, no matter where they are and am always glad to hear of happy endings. It helps, a little, to balance out those that don't end so well.

Excellent news! Nice to have a happy ending for a change. Thanks for letting us know.

I read this blog last night and came across your story of the hiker who went missing. This morning I came back to the thread to find the entry again so I could ask you if he had ever been found. I inadvertently came across this entry, and I was really glad to learn the good news!

It's funny/strange how one can become attached to a crisis like this and worry about someone that is a total stranger.

By the way, thank you for providing such good ultralite information. I'm planning an AT thru-hike for the spring and it's been very helpful. Keep posting. It matters.