Confession: I own a Kindle 2. 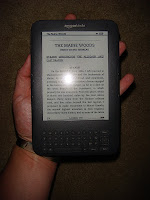 Anyone who reads this blog or hikes with me knows that I'm not a huge fan of technology in the wilderness. I think phones are mostly unreliable and serve as dead weight while headphones often distract from the wilderness experience and can even create a dangerous situation if, for example a cracking branch is an unheard warning of a forthcoming head injury or an unnoticed growl is an indication of pending unlawful carnal knowledge by wildlife. Yes, I'll acknowledge that they are nice to have in an emergency and headphones are fun to use while trying to sleep. Sure an eBook on the smallest iPOD is really weight negligible as a whole, so these things have their place.
Recently I picked up the latest generation of Amazon's Kindle 2 eBook reader (http://www.amazon.com/) for school and general reading while traveling. At 8.5oz for so much frill, it's tough not to make the mental leap for backpacking.
The latest Kindle (third generation despite being called the Kindle 2) is a pretty neat piece of technology, although it does have the look and feel of an early generation Atari where the iPAD runs circles around it in sheer attractiveness and function. But, the Kindle is $139 whereas a similar iPAD is $700+ and significantly heavier. 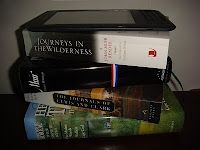 Right now I have 89 books on my Kindle which is capable of holding 3,500 electronic books each which download is less than 60 seconds. For this abundance of literature, I spent about $15 because all but 5 were completely free. In fact, of the five I purchased, one was $10 while the other four were less than $1. Amazon offers over 15,000 free books, many which are classics (Treasure Island, Pride and Prejudice, Red Badge of Courage, etc.). I also found several books by John Muir and Henry David Thoreau which was wonderful being that I have brought those kinds of books with me on non-backpacking trips merely to keep the outdoor memory alive while otherwise swamped in an increasingly concrete world. I found it interesting to note that in the long list of free books, nature books and religion books dominated much of the landscape (in addition to the classics). These two themes have always sat at the same table for me personally, so I guess it doesn't surprise me to see these topics related in this sense.
The battery life on the Kindle is absurd too: 3 weeks with the wireless function on or an entire month with the wireless function off.
It comes with a dictionary, highlighting function, notes function, bookmark function, text-to-speech (fun to use when tired of reading, when driving, or when desirous of romantic whisperings from a semi-robotic voice). It also has a very crude web-interface which is frustrating to use, but functional (well, barely functional). With the optional 3G unit, this might be a novel accessory for someone on the go if they could use it to send e-mails too, especially if the battery life is so impressive.
Overall, I must admit that I really like it despite very obvious and numerous flaws. It's basically early technology for this kind of thing and I guess I am willing to accept the remedial handling, not perfect layout, and design flaws that make it far from the amazing technologies we have in our modern society because in bulk it is just an electronic book and handles that function just fine.
With that said, I continue to be biased about technology in the wilderness because often I think it is impractical, but it does have some benefits much like the Kindle. With that, I admit that as a solo backpacker uninterested in hiking from sun up to sun down every day to check my wherewithal against high-thigh chaffing as I fly by the very sights I want to spend time to see - I have brought my Kindle with me while backpacking and found the extra 8.5 ounces to be (most of the time)...wonderful.

Posted by Jolly Green Giant at 4:26 AM

Totally agree with you assessment. I ordered the new Kindle when I finished the one paperback I was carrying on my last ten day hike after 6 or 7 days and had nothing to read the following evenings...

Excellent, I'd been thinking along the same lines since the new kindle with the cheaper price tag was announced.

The experimental browser maybe good enough for using with Google Reader, which is what I hoped. I recently read a book on my iPhone screen which I bought and used on the Amazon Kindle app. I've decided to experiment with the iPhone before laying any money on a Kindle.

I'm currently on the AT right now and have been carrying my Nook with me. It is an excellent resource for more than just books. We have the ALDHA book on it as well as other trail resources that would have been crazy to carry. Plus it offers Sudoku or chess if I want as well as reading. I've even had to use the limited web browser when in towns without internet access. I carried what books I found the first thru-hike but I am happier this go around with books of my choosing.