Camping with a 3-Year Old 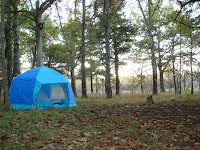 Over the weekend I took my three-year old son camping at Big Meadows in Shenandoah National Park in central Virginia. At a young age, my parents exposed me to this wonderful place and I have returned several times per year for as long as I can remember. It was only fitting to me that this would be my son's first overnight trip in the park as I wanted to start the tradition early and impress upon him the importance, fun, and beauty that only the outdoors could provide.

Initially I interpreted my own actions to be equal to brain-washing, a practice utilized by most parents in one way or another as they try to shape their children to the people they want them to be. Much like with my favorite NFL team who hasn't been a real contender in nearly two decades and yet my children both wear t-shirts and hats bearing their logo, I wanted my children to love the outdoors as I do. Fortunately, the outdoors has a way of enticing young and old without much effort. The drive up Skyline Drive, known for its expansive vistas into the valley's below, was enough for my son to start remarking how "pretty" the view was or how "cool" it was to see farms far off in the distance. His positive comments continued when we arrived to camp with every passing deer or with general camp activities. By the time he was barefoot, stuffing s'mores in his face, getting memorized by the fire, or tackling me as I tried to sleep in our tent, I was pretty sure he was hooked. 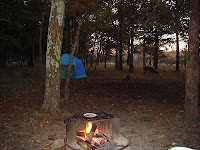 The campsite I selected for this outing was one that I am all too familiar with and consider it to be one of the best in the park. It's a deep walk-in site which opens up to a field of oak trees which really no other site offers. The site is as secluded as it could possibly be for a public campground which proved to be worthy of this designation even during the peak season of October which packs the entire park with leaf-peeping tourists.

Oddly enough, it was the site itself that proved to be the most entertaining. At a young 3-years old, my son wasn't about to "hike" in any real sense, so our entertainment needed to come from the area surrounding our tent. I brought a soccer ball, his velcro baseball glove, several kid books, and plenty of food that neither he nor I should eat should we desire to be anything less than a sphere in our old age - yet keeps a 3-year old's interest quite well. Fortunately, entertainment was quite easy to come by without all the stuff I brought from home.

Throughout our time, especially during the night, we were visited by an endless amount of wildlife. I had a point-and-shoot camera with me which did nothing more than capture darkness when the sun was anything but high in the sky, so I have little tangible evidence of the remarkable nature encountered of our trip. Deer were as close as 1 foot to our tent at any given time often doing little more than crunching away on acorns as I had casual conversations with them explaining to them that my son and I were trying to sleep. We had a visiting owl who apparently felt the need to be quite conversational. We had a fox who used the area as his personal racetrack and and endless number of chipmunks who proved to be terribly illusive to my son who otherwise had never seen one before and did his best to capture one to hold it still long enough to have a good look at it. Coupled with a strong variety of birds, leaves of every shape, size, and color, and the comedy routine of me trying to cook kid foods over a fire and grill (lightweight cooking is so much more simple folks), my son didn't lack for entertainment.

Probably one of my personal favorite moments, although disturbing in the middle of the night, was when two small bucks decided to test their antlers against one another. This practice first started next to my tent in the middle of the night and then progressed to no more than 50 feet away once the sun came up.
Funny enough, I was amazed at how un-scared and un-bothered my son was with all the new things around him. He didn't care that he was sleeping outside and actually considered it to be quite fun. He didn't care that animals were making noise all night or that bugs made themselves known every now and then. Simply, he was camping and enjoying himself which was an experience I hope he continues to embrace in the future. I know I will and I look forward to the time when he is able to carry his own backpack, hike for more than a run around the campsite, and participate in the greater wilderness experience.
Regardless of the age of a child, whether wholly dependent on their parents or knee-deep with their own family, I think camping and outdoor experiences can't help but offer unique and memorable experiences that should be sought throughout a lifetime. It is more entertaining than any TV show or movie and fills volumes of dialogue with no verbal communication whatsoever.
Upon returning home, my son filled my wife with stories of what he saw and things we did. Before bedtime, unprompted by anyone, he grabbed several pillows and a couple blankets and organized them in our living room into what he described as his "tent". He then told me he wanted to sleep in our backyard tent at some point this week. Calling him "my little camping buddy" seemed to be plenty fine by him too and he seems to be a little more loving and happy since we returned.
One last thing worth mentioning which I say for young parents in a similar situation - at 2am while snuggled under warm blankets and sandwiched between cheap sleeping bags suitable for a kid, there is a huge difference between "I think I peed my pants" and "I peed my pants". Fortunately for us, it was the former.
Posted by Jolly Green Giant at 5:21 AM

Email ThisBlogThis!Share to TwitterShare to FacebookShare to Pinterest
Labels: Camping with Kids

great post man. i love this blog. i use google reader and the RSS feed so i dont miss a post.
do you use an RSS reader? if so i'd like to know what blogs you read regularly.

I love that video of the deer! My kids wish they would see more of those kinds of things when we go out. The problem is that they sound like a herd of elephants when tromping through the woods, so I doubt too many animals care to hang around for long...

@ Sean - I don't use an RSS reader likely because I don't know how. I'm not very technical and a lot of the problems you see with my blog are a direct result of the fact that I use templates which often don't cooperate and ultimately I can change them (take for instance the lack of spacing between paragraphs on the bottom portion of this blog entry). But free is free, so I can't complain too much. The blogs I check regularly are principally those to the right of my own blog as I like to try to give those I follow some advertising too. The way I have it set up is that blogs with new posts automatically rise to the top, so I instantly know when someone has posted a new entry. I have lots of interests, but I try to stay focused on lightweight backpacking and the gear, food, and techniques used to support this endeavor. So if you ever wonder what I'm looking at, just scroll down and look along the right side of my own blog. Thanks for stopping by.

A truly heart-warming post. Your child is a lucky one who will grow up with a life-long appreciation of the "fun" of outdoor activities!

Mind sharing what tent site you are using there at Big Meadows?

I'm glad your trip went well. Sounds like you had an excellent time. You'll have many years of great camping memories with your sons. We started camping with our boys when they were 3 and 5, and so it continues, only now they can share in the driving to SNP. They also collect all the firewood and build the fires while I sit back and enjoy!

@ Joey - With the wealth of people in cyberspace, I'll say that the site is one which is on the edges of the campground which is easy enough to spot when looking at a map.

I remember similar experiences of camping and backpacking with my family, starting at the age of 2. It certainly instilled a love of the outdoors in me, and it sounds like your son is already hooked!

We were just out there hiking that section of the Appalachian Trail. Good thing the cold snap broke in time for your trip. The stink bugs have been absolutely horrendous this year though. Hope they left you guys alone.

Also, thanks for adding my site to your reading list. I think it might need to be refreshed as it doesn't show the site title. Strange.

@ OceanMountainSky - I don't know why your link doesn't come up like most of the others as I put it in the same way. In this application, all that I do is add your URL to the link area and it "should" come up. I've added it and removed it a couple of times, so I don't know why it just says "Articles". If someone could tell me how to fix it I would as otherwise I'm not doing anything differently than the others.

Nice trip report Jolly. Hope all is well with you and family. :)

Just came across your blog, great post, and sounds like a great trip! I've been trying to get out with my two sons (not the ol' tv show!) more, but its been tough with the sports, etc. that they are in. My oldest just joined Tiger Scouts, so I'm hoping that lets us do some more outdoor related things together as he advances through scouting.

"the time children spend in nature — particularly the activities we looked at in this study — determines their environmental awareness as adults."

I saw this once... and thought of your post when I was reading it. I hope you keep it up. I don't have any kids, but I know the power of innocence. Fear? As long as you are confident... they fear nothing.