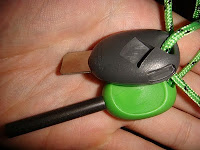 If you backpack, there is a good chance you carry something to make a fire. If you are responsible, you likely have some redundancy being that the ability to make fire may be the difference between life or death, or more likely, a tasty marshmallow or warm meal. Redundancy in fire tools usually includes matches, a lighter, fire plug, or some kind of flint.

Like many backpackers, I generally carry a necklace with a few things on it. Whether as a last ditch effort for safety or peace of mind if I ever get separated from my backpack, it's something I always have. On it is a flint striker, whistle, and microlight. On the whistle, I glued a button compass which has probably been more useful then anything else when I need a quick direction reference. I've gone back and forth with whether to include my Swiss Army Knife mini as it is a bit cumbersome to have all this stuff around my neck even though I find it to be very useful and far more available if not otherwise stuffed in a pocket or sack.

About a month ago I was studying my necklace for wear and noticed that my flint was pretty worn both from use and likely from my body sweat. I also noticed the molded handle was cracked. As I tinkered with it to see how bad it was cracked, it came completely apart. I think it's fair to say that holding more on the flint than the handle in the future will probably be a smart choice.

With that, I needed a new flint and decided to look for another Swedish FireSteel to replace the one that I had just broken. To my surprise, there was a new FireSteel on the market listed as a "2.0". It was a little bulkier than my previous FireSteel. The striker was shorter in length, but was incorporated into a whistle. The molded grips on both were much thicker than previous versions, possibly because others had the same problem I did.

The whistle I carry is an ACR because it was dubbed one of the loudest pealess whistles by the Coast Guard. Oddly enough, and having used it several times to get the attention of friends or scare off an unfriendly bear, I really don't find it to be that loud. In fact, the pitch itself is more annoying than anything and the sound really doesn't travel that well. I do like the fact that it doesn't require a ton of effort to blow, as it seems air seems to be better controlled. For many years before college, I refereed youth basketball. Any time I blow my ACR, I wish I had my old referee whistle which was easily capable of deafening anyone within the building. With a pea though, it is susceptible to freezing, so I leave it at home. I think the whistle most similar to my old referee whistle is the Fox 40 as it seems to have a rolling sound, although it exhausts air pretty quickly. Comparing the ACR whistle to the new FireSteel 2.0, they really aren't that similar as the FireSteel 2.0 sounds doesn't really generate a loud enough sound to be useful. The ACR is a little easier to blow because of the way the FireSteel 2.0 tried to incorporate it into a handle with a lanyard punch right next to the whistle part which gets in the way a bit.

Regardless, it's always nice to carry gear which is multifunction and the FireSteel 2.0 (http://www.light-my-fire.com/) may be perfect for your needs. As for me, I'll stick with the better whistle (either ACR or Fox 40 depending on my whim) and I'm debating on whether to carry the more robust flint stick.
UPDATE: One of our fine readers suggested the Exotac Nano Fire Starter (http://www.exotac.com) which is a lightweight and waterproof solution to fire rods otherwise damaged by sweat and moisture. I've got one on the way. They are a little more expensive, but it's nice to still be able to carry it around my neck and know that it isn't going to get damaged.
Posted by Jolly Green Giant at 4:28 AM

If you don't mind the size, get a Storm whistle. I put my fingers in my ears when I blow that, so my ears won't ring afterwards.

I once used it to get the attention of some Scouts a quarter mile away on a Pacific coast beach, so it really carries and cuts through noise (like surf).

I tend to carry a slightly more extensive survival kit in my convertible trousers/shorts pockets. My swarmy knife and compass are similarly always attached to me.

My old fire striker had similar problems. It's fallen totally apart because of sweating and wet climate. That's when I discovered the exotac nano striker on Jason Klaas blog. Ok. the price is a little higher compared to a normal firestriker. But it's waterproof, you've got plenty of sparks and it's very lightweight.

And you can change the ferrocerium rod when it's done.

Speaking of whistles... I've never missed one. But maybe that's because I've never been in a emergency where a whistle would have been of help.
So I'm still looking for a very lightweight solution to have as an EDC.

@ Basti - Awesome suggestion. I missed that on Jason's blog, but I have one on the way. Thanks for recommending it.

I've got the same fire steel. It is a bit short but once you get used to that it works fine. The nano striker is tempting though. Guess you can't have too much gear...

Jolly Green,
This is good timing as I am looking for a firesteel to add to my neck sheath. I need the mini though (my standard Light My Fire won't fit. So you know if the 2.0 version will come in a mini? It kind of looks like there are 2 sizes in the picture on their website but they don't clearly state it.

I was wondering the same thing as I too think the larger Scout is a little too large. I would assume they would be releasing the smaller version being that it sells so well, but who knows. For your (our) purposes, you might just want to purchase some firerod blanks. You can find them in a couple of places to include here:

One of the only things I double-up on these days is a whistle. This after I found myself uncomfortably close to and alone with a bear in SNP. When I went for my whistle, I discovered I had left it on my backpack.... in the cabin I was staying in some 8 miles from said bear. Instead, I was wearing my daypack, which was whistle-less. Now I have whistles everywhere, on my pack, around my neck, snapped to my pants belt-loop. I admit that it's a post-traumatic reaction. I also carry a storm whistle. And having heard your whistle blow, I think you should get one, too.

If a firesteel is your first choice for making a fire Firesteel.com has heavyduty (and yes heavier) firesteels. I have the Gobspark Armageddon. It will probably last a years and throw off a lot of sparks. Cost about ten bucks and comes with a great striker. I did a review of sorts a while back on my site.

If you don't mind a less dramatic whistle which is suitable for short distances, integrate a whistle into the sternum strap. REI has a bunch, but I couldn't find them on their website. But these are essentially the same thing: