When I first got into lightweight backpacking, I can honestly say I was a bit of an unintentional gear snob.  When I saw what others were carrying, I couldn’t imagine that they were making sound gear choices when there were so many other better options than what they were lugging around.  Whatever the piece of gear they had, for the most part anyway, I knew of a lighter option that probably performed just as well or better.  It was only after I caught a couple glances that I realized I had become “that guy” and realized that I was ruining some of the dynamics of backpacking by wiener measuring through gear comparisons.  I’m happy to report that I’m a bit wiser now and acknowledge that gear is a personal preference, cost and availability always plays and option, and some people can be plenty happy with just about anything. For my stuff, I'd rather not spend as much as I do, but I sure hate the extra weight of other choices.

One of the items that was on my never-to-own list was the integrated canister stove put out by JetBoil.  Sure it was a very efficient cooking system, but it was also costly, had a lot of parts, had a tall profile which I felt was unstable, didn’t allow for interchangeable parts from other manufacturers, and of course, it was far heavier than what I was carrying. 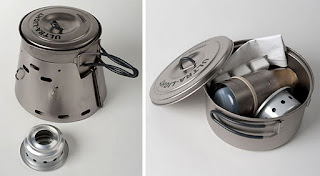 I had always been plenty fine with a variety of stove options.  Whether it be a converted cat food can alcohol stove, a lightweight esbit stove, or the Monatauk Gnat titanium canister stove which I wrote about previously, all were lightweight, inexpensive, small, functional, and plenty sufficient for my needs.  For those wondering, I usually carry the Titanium Sidewinder System, part of the Caldera Cone product line, offered by Titanium Goat (www.titaniumgoat.com).  The beauty of this system is that I can use it with esbits, alcohol or even burn natural resources which is truly wonderful and allows me to avoid worrying about fuel options.  It is also a great windscreen, a stable pot stand, and packs up into a very small package.  It is very efficient and burns hot for the simplicity of the stove.  The downside is that it isn’t as quick to boil water as I’d like.  Additionally, I’ve had problems lighting esbits on occasion.  Also, sometimes I prefer not to carry alcohol and many times (especially in the rain) natural resources aren’t available or I just don’t want to waste the time to collect them.  This leaves me longing for something a little more resourceful, at least some of the time.

For those of you who follow Backpackinglight.com, they had an article recently with comments from Dr. Ryan Jordan (CEO/Publisher/Instructor) which focused a great deal of attention of the JetBoil Sol Ti, a titanium one-person cooking system.  After reading the specs and performance, better understanding its usefulness, and acknowledging that at times I’d like something that works a little more efficiently and reliably, I decided to pick one up.  This system runs about $149, but through a handful of sales I was able to snag one for under $100.  You can read more about it at http://shop.jetboil.com/index.php/sol-cooking-ti.html. 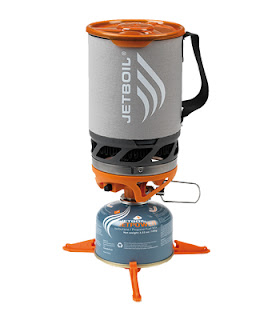 I’ve had mine for about 9 weeks now and I can honestly say the system is pretty intriguing.  I like the fact that everything, to include the fuel canister, canister legs (for support), stove, supplemental pan-cooking attachment, spoon, lid, cozy, and a separate bowl all fit together in one 4”x6” system.  The pan attachment is a nice option for cooking something other than a boil-in-the-bag meal and the lid is nice because it helps keep things toasty and even has holes for a strainer.  It also comes with a unique integrated igniter, although I wouldn’t wholly rely on it as it can fail.  Below are the weights:

I carry only the pot, cozy, and stove (with tin foil lid) – 220g/7.76oz.  For comparison, the 900ml Sidewinder system mentioned above comes in at 176g/6.20oz….37 grams can be subtracted if tin foil is used instead of a titanium lid just like 18 grams can be subtracted from the JetBoil.  Both are weighed without fuel and I can’t hide the fact that a fuel canister has a some weight and zero function once it runs out of fuel (just like an alcohol bottle).

I’ve used this system in a variety of temperatures and conditions (wind, rain, down to 25 degrees, etc.) and it performed very well.  I quickly learned how this system got the name “Jet Boil” as it takes just one listen to the burner firing away at an impressive volume to know that something is happening.  Users of titanium know that it heats quickly, often unevenly, and isn’t the best option for finely cooked meals.  In fact, using it just to boil water is usually a safe bet which is what I intend to use it for unless I get overly creative and decide to bring a pan and cook something a little more worth eating.

I was very impressed with the fact that I could boil water in slightly over 2 minutes in every situation which I find quite amazing.  Considering my esbit, alcohol, and natural resources generally take 8 to 12 minutes in any other stove set-up I own, I realized how perfect this system could be for my wife and I, groups, or long-term hikes as fuel consumption is less because it boils so quickly.  I think it will also be a nice option in Virginia winters which I make a specific reference to “Virginia” because our temperatures rarely push less than teens which is even rare.  Those in sub-zero temperatures would likely want to consider another kind of stove and propane option instead of butane.  The smaller canister to integrate into the pot is nice as it means less air as it empties and compression isn't so impacted.

What I don’t like about this system is several things.  First, it remains expensive and I continue to not like the fact that there are several parts.  I think it is over built to a certain degree too.  My biggest gripe though is how the pot sits on the stove.  The user essentially needs to line up holes and turn it to a fixed point so it is seated securely.  This is done principally for climbers who actually cook with the system while hanging it.  The problem is that the seating isn’t smooth.  In fact, it is clumsy.  Numerous times I found myself fighting with the stove to get it on, and more importantly, off.  In the right conditions I could definitely picture spilling the boiling contents in my lap or dribbling it on my hands or gloves.  Not good and I see no way around it with the current design.  I also don't like the little legs that are supposed to fit on the canister.  For whatever the reason, I can't figure it out.  For the bigger canister, the legs are not necessary.  For the smaller canisters. like those needed to fit inside the pot, it's clear they could be useful.  The neoprene wrap around the pot is helpful for keeping hands from getting burned, but it could stand to be more robust as it is too wispy and stretchy under the weight of a full mug.

So it is worth it, maybe I suppose at least in certain conditions.  By having it, I feel like I now own a piece of the Mr. T starter kit for more conventional lightweight backpacking.  As such, let's call it Option 2 taking a backseat to my other stoves except for perhaps in winter.
Posted by Jolly Green Giant at 3:00 AM

@ Mrs. Joy - I think you and I share the same mentality. I too can more easily drop money on part of a sleep system or shelter, but $100+ for a stove seems a little silly. Let's just say people without money in their pocket shouldn't lose sleep over this one. It's pretty neat and very functional, but there are other ways to boil a cup of water.

I bought just the Sol Ti companion cup since I already had a Flash. I like the simple use of the item, but hated the cost(pot, cozy, and lid-$69). I agree with the difficulty in installing the pot to the stove. It's worse than it was on the flash. Also, when purchasing the companion cup, it needs to be said that though it works with the Flash, everything won't stow in the pot as it did with the Flash. It will be my go to setup for cold weather, then sit on a shelf for the other 9 months of the year. BTW, it's great to see you posting again.

"The Mr T starter kit for more conventional lightweight backpacking." I like the sound of that :)

I saw one of these in use a few months ago, and it is mighty impressive how fast it boils. I'm still partial to my Caldera, though. Regardless, I'm happy to see mainstream companies lightening their products more and more. It's a good trend.

Nice review and some good points. I had the same issues with the Jetboil Zip system with getting the mug on and off of the stand with lining up the slots - it's on all their designs. But I never had any problems spilling with the lid on and stabilizing the canister with one hand and using the other hand to twist the mug. The neoprene sleeve seems to be just right for me - no burning sensation when not using gloves, but it is warm, not anything that couldn't be handled though after coming to a roaring boil.

What issue did you have with the fuel canister support? It's a tight fit to get the canister in the notches, but it should be pretty straightforward. If a tight fit is what you're referring to, then I agree - it's tight. But, you don't want a wobbly support either...

Good review, glad to see people talking about something besides beer can stoves once in a while!

I used Sol Ti on my JMT. It performed fine except at high elevations. I had to use a lighter to get it going. Then just the other weekend something nasty happened. A couple of the folded elements on the bottom of the cup broke off, shot out and burned my arm. That was NOT fun. I am taking my JetBoil back to REI.

@ Ewa - I've actually heard of that before. I think the issue was part of the fact that the bottom wings are titanium which do burn when the flame isn't exactly where it should be. Good thing you purchased it from REI as I'd definitely return it too.

@ Chris - I couldn't get the little legs on the 8 oz canisters for some reason, well, not without some difficulty anyway. Once on, it's a fight to get it off. It worked fine on the 3.5 oz. I've tried to loosen up the seal from the stove and cup by taking a needle nose to the little nipples. It's has worked a bit, but not enough to say it isn't still an issue.