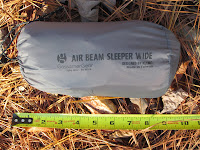 In the not too distant past, I raved about a very small cottage manufacturer of sleeping pads.  I won’t mention the company here, because unfortunately the owner/operator fell behind on his work and his solution was to keep taking orders (customer money) without providing a product.  His business is now defunct. 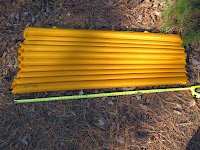 One of the products he offered was something that the industry hadn’t seen – an inflatable sleeping pad that tapered both vertically and in width and length.  It meant you could get a ton of cushioning and girth around your torso and have it taper down at the knees where padding, width and extra weight simply isn’t necessary.  By the time his business closed, he was adding synthetic insulation to it which made the pad into a 4-season option.  I had one of his prototypes and the valve simply never worked.  Other than the valve though, it was beautiful and was hands-down my favorite pad.  I returned it to him for a new valve and never saw the pad again. 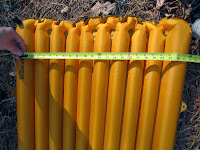 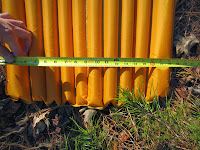 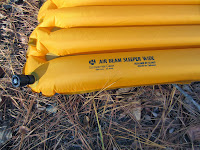 While the Gossamer Gear Air Beam Sleeper is not insulated, it works just fine for 2-3 season use as-is, or a simple foam pad can be added for increased warmth. 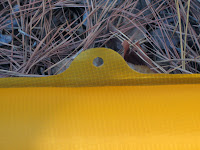 One thing I really like about the Gossamer Gear Air Beam Sleeper is that it has tabs on the side for quilt users to be able to secure their quilt to the pad - a great feature for those of us in the lightweight backpacking community.

I like the Gossamer Gear Air Beam Sleeper quite a bit, but there are some drawbacks.  First, I’m not aware of a creative solution to blow it up without using my mouth which means it gains condensation fairly quickly.  Second, while it is refreshing that different sizes are offered, I’d like to see one that was considerably wider.  At 6’5” and 280 pounds, I wear a 54 wide jacket which means I’m very broad shouldered.  I figured the 28” wide XLARGE would suit me just fine, but it isn’t quite big enough as the pad loses measurable width when inflated. 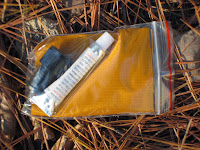 Regardless, Gossamer Gear has introduced another great product and I truly hope it evolves into a padded and wider product that will stay on the market.
Posted by Jolly Green Giant at 2:00 AM

Would a Big Agnes Pump Sack work to inflate this pad? It's what I use for my Neo Air pads.

I'm a bit uncertain on that because I don't have a Big Agnes Pump sack. I have a couple of sacks, one for an Exped and another for a now defunct Kookabay. Neither would work. The inflation knob on this pad is an actual knob which needs to be turned one way to open and the other to close. It doesn't physically come off or create a gap to plug something in, but it does seal and release nicely.

Perhaps due to my own limited knowledge, I am unaware of an alternative option to blow it up.

Thanks for stopping by.

Here's a video on how to inflate your pad with a trash compactor bag. Very efficient and you never pass out!

JGG, I am a big guy as well 6"5 240 looking for a new light weight sleeping pad. Does this pad being only 56in bother you. Seems like a good bit of your lower body is not on anything would be strange. Thanks Chris

@ Anonymous - The pad is tapered, like a wedge, so your legs don't drop off as if it would if you merely bought a small pad with consistent height throughout. This is my second tapered pad and I'll admit that I was skeptical initially, but quickly realized that the tapering is subtle enough that it isn't noticeable.

Perhaps it's because I'm heavy (I've got another 45+ pounds on you), there may be an element of "squish" which further makes it a non-issue. I'm a fairly uncomfortable sleeper, so when I say it is a non-issue, believe it.

To me the more important topic to pad sleeping comfort is width. The wider the pad, the more comfortable to me. In fact, I wouldn't mind if this one were wider despite the fact that it is already wider than most.