The Bias of BACKPACKER Magazine 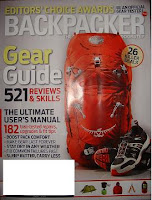 Many of you likely subscribe to BACKPACKER Magazine (http://www.backpacker.com/). I’ve been a subscriber for quite some time. On the positive, I love their pictures and it is always fun to learn about available gear and hopefully gain some valuable insight into one technique or another. BACKPACKER also does a decent job at highlighting trails and testing mainstream gear.

Unfortunately, BACKPACKER is woefully inadequate on many other fronts. Their webpage is absolutely abysmal. Their online gear guide is both biased and very hard to use. Their entire online format is actually three different parts run by three different service teams which do not mesh well together. In fact, a problem with one will no doubt negatively impact the others. Often advice BACKPACKER contributers provide is out of date or even factually inaccurate. Even in their latest issue they make claims that liquid water treatment “kills everything”. I am unaware of any treatment that “kills everything”, with exception of those which humans could not otherwise ingest after being treated. If they are correct, I'd like to know what treatment their referring to as they weren't specific because I guess they are intentionally implying that all water treatments are the same....which simply isn't true. I've even seen issues which gave completely wrong compass navigation advice. I MEAN SERIOUSLY!!!

One thing major thing that absolutely irritates me about BACKPACKER is their total misue of the label "ultralight" almost to the point of absurdity. That topic alone is worth a lot of conversation which will only merely serve to get me more cranky - so I'll assume most of you get my point. For those who don't, in summary, every tent, sleeping bag, and pack on the shelves of REI and Walmart which say "ultralight" -- aren't. BACKPACKER also spends a disproportionate amount of time on articles about Colorado likely because their headquarters is in Boulder. I should also mention that BACKPACKER's inherent bias towards the west is cleared merited. The west has amazing trails and Colorado is in many ways the Mecca of the outdoor industry (I even lived there for a couple of years). But…there is a lot more to the wonder of the American outdoor culture than the west. The Colorado bias seems to spill over into their editors and writing staff too. In fact, a quick review of their backgrounds will likely no doubt reveal most of them are from the Colorado area. Most are also seemingly recent college graduates with degrees in Granola who are happy to work for BACKPACKER to get the chance for some free gear, some face time, and time to essentially give us their limited and inexperienced theories on life. Basically, I'm not convinced readers are getting "expert" or even "researched" guidance most of the time. Instead it appears as though guidance is terribly opinionated instead of educated. Personally, if I were an editor I'd like to know the 10 different ways you could accomplish a goal and perhaps the top three that worked the best. Unfortunately, it seems BACKPACKER publishes things that 21-year old Boulder graduate prefers when doing an overnight out of his truck while downing a six pack with his closest friends. The videos on their website are equally discouraging. I recall one video of a girl trying to show how to properly hang a bear bag. She seemed totally clueless and it clearly took an overabundance of time merely to get it right once as the sun actually set during the making of the video. Another video shows how BACKPACKER chose to test the waterproofness of sleeping bags. I'd hate to label throwing it in a river as even close to "real life" conditions. But alas, I guess "an opinion" from someone and "some form of testing" is better than nothing. Also concerning is the total bias BACKPACKER yields towards mainstream manufacturers. GRANTED…the mainstream manufactures, by definition, are the most popular so giving the “big dogs” their due attention is warranted. I’m completely fine with giving them more face time than others, but how about at least acknowledging there is a whole other market which more often than not they fail to address.

In their latest issue, their annual “Gear Guide”, you will note that BACKPACKER continues to walk hand-in-hand with mainstream manufacturers while nearly completely omitting anything having to do with the ultralight backpacking movement. To be applauded, BACKPACKER recognized Henry Shires with Tarp Tent (http://www.tarptent.com/), briefly commented on GoLite (http://www.golite.com/) and Granite Gear (http://www.granitegear.com/), and mentioned Gossamer Gear (http://www.gossamergear.com/) only by name. To be discouraged, BAKCPACKER barely mentioned these guys and otherwise completely omitted the contributions by ULA-Equipment (http://www.ula-equipment.com/), Six Moon Designs (http://www.sixmoondesigns.com/), Mountain Laurel Designs (http://www.mountainlaureldesigns.com/), Backpacking Light (http://www.backpackinglight.com/), Titanium Goat (http://www.titaniumgoat.com/), and many, many others. All of these small cottage industry manufacturers offer great niche products for the lightweight and ultralight backpacking community and it is very unfortunate that BACKPACKER remains with their palms so greased by the mainstream group of manufacturers that they can’t even merely recognize the contributions of the cottage industry.

One of the reasons this irks me so much is because of an observable trend noted by the mainstream industry which clearly shows a movement towards redesigning gear and offerings more towards those which have been offered for quite some time by the small, yet quality-driven, lightweight backpacking cottage industry. Gear is getting lighter – as common sense agrees for anyone who needs to lug the load. I will be extremely disappointed when total knock-offs of these products are produced by The North Face, REI, Mountain Hardwear, etc., which I fear is something we can expect in the future….all while many of these small companies function wholly out of their homes or garages and could lose their footing fairly quickly if the mainstream companies choose to permanently borrow their designs and insight. The reality of this happening is real if for no other reason that many cottage industry manufacturers have decided NOT to patent their designs as they are more concerned with people like you and I being able to succeed on our own instead of their profit margin. Henry Shires (http://www.tarptent.com/) remains a good example of this as his tarp tent design has been on the internet for years - provided by him. Of course, it is doubtful that any of these small fish could fight the big fish if it came down to a legal review of patent law.

Following receipt of the BACKPACKER 2009 Gear Guide, I felt inclined to write the editor of BACKPACKER merely to encourage them to be fair to the smaller cottage industries especially when the format is assumed to be a collective gear review. No one is asking for free advertisements, just an unbiased review of all available gear as implied by their magazine. I encourage you to do the same.

I voiced this same sentiment to Henry Shires (http://www.tarptent.com/) and he correctly mentioned that he spends nearly no money on advertising and that his business has solely grown through word of mouth. While this is completely true for both Mr. Shires and others, BACKPACKER knows these cottage industry manufactures exist; they just choose not to include them in most cases. Again, this is very unfortunate.

Backpacking as a whole is about getting in touch with your true self – the self that doesn’t need to be overly concerned with money, possessions, or even the burdens of life. I’ve had more honest heart to heart discussions with people on the trail than nearly any other place I can recall and in many cases these conversations were with nearly complete strangers. My point is that the backpacking industry in many ways is grounded on purity, integrity, and honesty. In my eyes, I don’t think asking these things of BACKPACKER is too much.
Posted by Jolly Green Giant at 9:52 AM

This issue pissed me off too. I don't normally read this magazine but happened to look at this one. It's pretty clear from reading it that the editorial group is not fire-walled from the advertising group. Product-by-product comparisons aside, I will be sticking with the cottage industry manufacturers like Gossamer Gear, Six Moon Designs, and Mountain Laurel Designs because I value the personal relationships that I have with the people who runs these companies as much as I do their gear. Have you ever tried to ask the president of mountain hardware a question? Have you ever tried to get Kelty to re-sew a mesh pocket for you? Need I say more?

I became especially unnerved with Backpacker Magazine when in last year's gear guide they reviewed a computer printer.

I have subscribed now and then only for the photos and to gain knowledge of backpacking destinations in the USA as I wish to hike there one day. I see your point on the kit side. Samh nailed it with "they reviewed a computer printer". What was that about?.

Well Said! I remember that video about the bear bag--they should have been embarrassed to post that!

I just happened to watch that bear bag video yesterday - I could not believe the girl actually works for Backpacker mag. I thought it must have been some kind of joke!