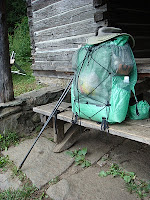 Responding to reader requests to post more trip reports, I figured I'd casually mention a 20-mile hike I recently did off the Appalachian Trail and in the South River Falls area of Shenandoah National Park. I personally have a tough time with most trip reports because I find them a bit silly to discuss the act of hiking or seeing this or that when pictures do such a better job of illustrating the point. Course, everyone doesn't bring a camera with 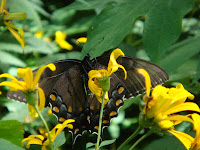 them and often the great pictures are missed because of poor lighting, camera problems, user problems, or limited windows of opportunity to snap the perfect picture. Personally, I have a pretty remedial Sony camera which I'd love to upgrade, but just haven't found one that is small enough, lightweight enough, and high-performance enough to make the switch. I have a "professional" Nikon camera, but I'm not about to lug that backpacking. 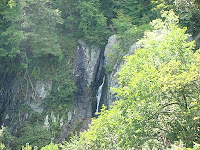 So for what it's worth, I figured I go into a couple of random thoughts for those of you that like this sort of thing. First off, despite the weather being miserable for a good majority of the summer, I found the mountain temperatures to be completely and totally welcoming. Hiking in the middle of the week ensured 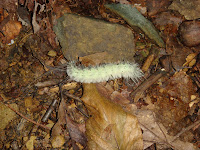 I'd be alone on the trail, which I was, but it also ensured my face would be reluctantly thrown into duty as the trail magnet for at least 40 spiderwebs. One of the reasons I use trekking poles is to clear out spiderwebs and my Tilley hat also helped forgo eating most of them, "most". 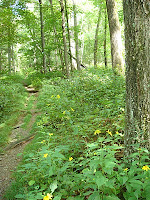 I think the thing that always surprises me when hiking is that there is always so much to see when there is really nothing to see. In the middle of summer, few things (plants or animals) really want to come out and play. And yet, the views are still amazing, the water is still pristine, and guess what, there are plenty of plants and animals that make an appearance if you take the time to look. 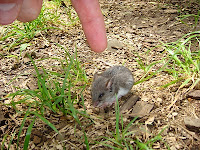 On this trip, I was continually surprised at the number of small things that I would blow by if not paying attention. Whether it be a simple slug crossing the trail, a field mouse oblivious to a giant hiker close enough to pat it on the head, a garter snake basking in the sun, endless butterflies carelessly floating around, brilliantly colored 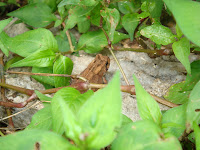 caterpillars, and wood frogs that figure they can blend into the environment if they sit still enough, it all makes for a plenty fine outing in my book. 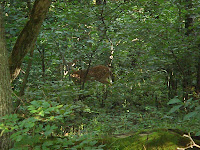 In my neck of the woods, I think it is fair to say these critters are common. Equally common are deer and black bear. I've actually hand-fed apples to deer in the same area many times in the past as apples trees are scattered throughout the mountains and the deer are infinitely familiar with human visitors taking in the views. Although it is not the smartest choice to combat the urban-wildlife interface by feeding wild animals which can create a problem, it does create memories to last a lifetime. 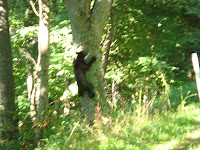 Since people like to hear about bears, I figured I'd mention them. I came across two adolescents on the second day of my trip after seeing plenty of scat and fully assuming I'd see one. I think in general, I come across a bear around 50%-75% of my hiking adventures. Unfortunately, apparently I am woefully stupid because I don't own bear spray and quite honestly I am not a model citizen around bears. I find them fascinating, so I get too close and often invade their personal space. This has twice resulted in being charged. If you've never been charged by a bear of any size, here are a couple things I'll tell you. First, it is scary as hell. Take whatever machismo you think you have and toss it right out the window. By the way, they can run much faster than you and can climb a tree about as quick as you can blink. The theory of showing the bear that you are boss and standing your ground turns quickly instead into a grown man damn near peeing his pants and acting like a school girl. The snorting and aggressive demeanor coupled with the raising of back hair the the showing of teeth very quickly helps a human understand they aren't nearly as close to the top of the food chain as they think. AND YET, despite this illustration and my stupidity, my interaction with bears has always been otherwise uneventful (meaning I didn't get killed or injured) with exception to perhaps a few undesired pee stains.


This is a video of a bear I came across which I had very little time to react. Just as I grabbed my camera and started shooting, I realized I was standing on the intersection of my trail and an animal trail. As I'm evaluating my options and fully believing I was about to surprise a bear walking towards me paying attention to everything but me, sure enough I watched the bear turn slightly and start heading my way. I slowly start reacting which included taking a step to get off the intersecting trail and the sound of my movement startled the bear immediately as the video shows him high-tailing it out of sight. 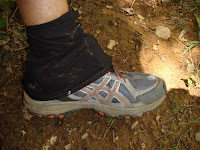 Because I'm a gear guy, I'll mention that I was wearing a pair of Simblissity Leva Gaiters which I wrote about previously. I really like the fact that they don't have a cord on the bottom and can stay reasonably secure around my shoe. This trip I also found that the water-repellent treatment worked quite well. 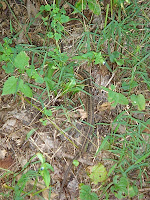 By the way, if anyone has any better way of displaying pictures, I'll be happy to switch. I've tried other options and I don't like it. I may actually switch this blog to an entirely different format (WordPress) as the auto formatting of these blog templates and limited control has been testing my good-natured "jolly-ness" for quite awhile.
Anyway, happy trails.
Posted by Jolly Green Giant at 5:00 AM

Could try just doing a gallery and captions at the top or bottom of a post instead of inline images.

Doesn't Flickr have a new embeddable slideshow feature? I've seen it used in forums so it should work in a blog post. I think other sites like Photobucket have something similar too.

Cool trip report. I will be heading out soon to finish up the southern section, can't wait to see the colors changing as I hike down to Georgia.

Thanks for the report. Love the pic's!