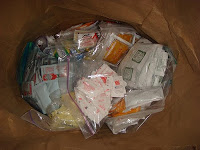 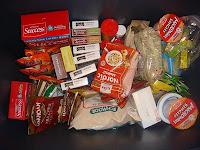 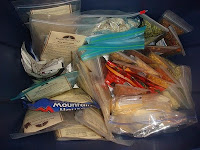 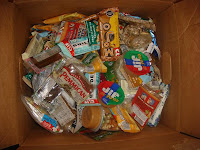 In April I'm happy to report that I've got a several day backpacking trip planned and I'm pretty excited about it because it will be the first time in 2011 I've been able to push away from work and family obligations long enough to stretch my trail legs. I was moving some of my backpacking stuff around when I was inspired to better organize four large food boxes. The result, aside from organization, was the realization that I clearly need to backpack more or buy less food. Seriously, I could outfit a thru-hiker at this point.... I probably had 200 food items and maybe 400 packets of condiments.

Posted by Jolly Green Giant at 4:03 AM

I don't usually buy the food until I am getting ready for the hike. However, I sometimes end up with leftovers, and depending on what it is it sometimes get eaten at home, or saved for the next trip.

I've managed to get this down to just one box and I find that's about the right amount. It is enough to have variety of choice for an upcoming weekend trip but not so much that it will possibly spoil.

One thing I didn't expect to find was so much dehydrated food had gone bad. This included stuff I dehydrated and stuff I purchased from the grocery store. It was pretty disappointing. Between that, and foods that I decided needed to be eaten now to avoid spoiling, oddly enough the photos were taken AFTER I removed these things. So sadly, I still have more than I need. I've also decided a lot of it were things I didn't want to take in the first place, whether because they were too bulky, too much of a pain to cook, or whatever. So now I have a bunch of stuff that I may or may not use. I should take it to Trail Days...

I'm a food snob and self-proclaimed trail gourmet. I do try to keep my food stash to a bare minimum, or to at least cook and dehydrate for several trips at once. I vacuum seal it and store it all in my basement freezer. I don't think I ever have more than a shoe-box worth of extra food to store, tho.

Hey Jolly! Have a great trip. I couldn't make it up that far this year :( As far as food for trips, I buy just enough for my trip. Wish I was more of a gourmet snob like Limo Lori though. haha! I'm just barely getting into dehydrating my own. Maybe Lori will give me some tips at the summit :)