Are you part of the minimalist footwear movement?  (I acknowledge that probably sounds funny coming from a guy who wears size 14 shoes because no matter how “minimal” my footwear my feet will always look like flippers.)  There is a clear movement in the outdoor industry debunking the myth promulgated for decades that foot comfort is directly related to overly manufactured and engineered footwear.  Historically footwear went from, well “nothing”, to animal skins, leather, and eventually heavy cushioned rubber and foam.  Oddly enough, foot health didn’t improve.  In fact, there are plenty of studies that human feet have become far weaker because they are not stressed to develop needed muscles and consequently get formed into unnatural positions by manufacturers more interested in selling style than function.  These over designed shoes result in posture and gate problems too which can have deep and long lasting effects.

Those leading the lightweight shoe market rely on the fact that minimal footwear helps promote the development of stronger feet which will no doubt equally impact posture.  To lightweight backpackers always seemingly interested in getting closer to nature, this type of footwear has multiple uses.  First, it truly helps you better recognize your surroundings as you pay closer attention to where you step.  Second, with a less robust platform, foot placement is significantly more stable.  Third, there is also an increase to the foot-on-ground sensation which is particularly relevant when hiking on rocks where “feeling” whether your foot is firmly planted and stable is critical.  Lastly, these lightweight shoes also serve as a great option for camp shoes or optional footwear when attempting a water crossing.

Altra Footwear  (www.altrafootwear.com) is a lesser known but growing company who is working on gaining a solid foothold in this market.  They have been around for 20 years and have a strong focus on the biomechanics of running and, quite honestly, other better known manufacturers are following their lead.  Bottom line, a shoe should not encourage heel strikes and that’s exactly what Altra Footwear attempts to avoid.  Golden Harper, the Founder of Altra Footwear, was a former All-American runner and running store manager who acknowledged the need for more natural footwear.  After decreasing the heel area so it is as close to the ground as possible (an innovation he refers to as “Zero Dropped”), he noted how the change in design from conventional footwear eliminated more common injuries.  Even his father, a former college athlete who injured his knee and was told he would never run again, used Golden’s new innovation to regain strength in his knee while reducing pressure, gain proper technique, and ultimately was able to run and win major marathons.

“The Adam” is one of several lightweight footwear options offered by Altra Footwear.  I found them to be a great option for people who like having an extra pair of camp shoes or water shoes.  Like other shoes in their product line, men and women’s shoes are not made the same.  All shoes have an ample and anatomically correct toe box which alone helps eliminate many foot problems caused by other manufactures who rely on functionally deficient fashion trends.  Each shoe is as close to the ground as possible, especially in the heel area, which encourages natural motion and foot strike.  Shoes even come with two different types of insoles which can be used or removed entirely, all for the purposes of gaining the right fit as foot strength is developed. 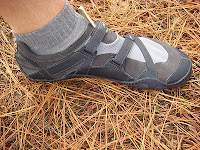 My personal use and observations of “The Adam” couldn’t be more positive.  Right out of the box, I noted the shoes are very visually appealing both in color scheme and design.  The shoes are well-made with high end materials and attention was clearly given to areas which would normally rub or be problematic.  They were far lighter than I suspected too.

Trying on the shoes and getting some solid movement with them was also very welcoming.  The Adam was quite comfortable and definitely changed my gate and posture for the better.  The extra roomy toe box was appreciated for someone like me with big feet.

Since I was a kid, I’ve had pretty poor feet.  Growing up around pools, it wasn’t uncommon for me to wear conventional water shoes after previous days in the pool wore my feet down to the point where they were too sensitive to walk in the water without protection.  In later years, I used those same kinds of shoes when fishing as it wasn’t uncommon for my friends and I to take fishing entirely too aggressively by walking out into the middle of rivers which would have upset any responsible parent.  These shoes remind me of the same feeling from my childhood where the minimalism seems to make me feel youthful and the lower profile encourages running.  I found myself constantly going into a trot, if not a run, even though I had no intent to rush anywhere.  Velcro straps on top of the shoe really helped cinch the shoe down tightly which is something I prefer and was a concern I had with other similar shoe options.  A breathable stretch upper was also something I liked as it prevents ground grit from easily getting into the shoe while still remaining well ventilated.  In my experience I noticed that the shoes required me to walk more deliberately principally because the elevation where I'm familiar with my foot making contact with the ground had changed.  This means I walk more lightly and thoughtfully.  Overtime, I've found that I'm just a little more comfortable as I guess I'm not taking waking for granted. 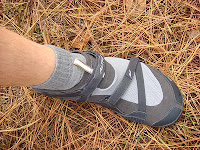 So what about real world use of these lightweight shoes?  Let me tell you the story of my 33 year old brother in-law.  Like every member of my in-laws and their extended relatives, my brother in-law has the ability to maintain a thin physique while eating whatever he wants and never exercising.  This is a far cry from the genetic disposition on my side of the gene pool where most of my family members gain weight merely driving by a restaurant.  "Exercise" to my brother in-law, and well, almost every member of his family, means pushing off the couch long enough to fetch a bag of Doritos.  Well, in July my brother in-law got the wild idea to run in a marathon.  He went online and learned of the benefit of low profile/natural footwear options and decided to buy himself a pair.  From July to October he ran casually, increasing his mileage each week.  Sure enough, in late October, he ran a whole marathon (26.2 miles) at a respectable pace wearing minimal low profile shoes.  He didn't even wear socks.  Within hours of the race, he could be seen sipping on water, commenting how his legs and feet didn't hurt at all, and kicked back on the couch assuming his more natural position - eating a bag of Doritos.  A week later, he reported no discomfort whatsoever.

Bottom line, these are a very interesting and worthwhile shoe whether you’re a runner, a minimalist footwear user, someone looking to get closer to nature or your improve posture, or a backpacker in need or camp shoes or water shoes.  These are an option worth considering.  The weight is just 4.7 ounces in a size 8 and they run about $79.  This is far lighter than other similar options that I've come across, and in my opinion, these are better constructed.  Also, and thank goodness, an investment in these will help you avoid wearing Crocs and having them compared to clown shoes.

You can find a store close to you at the Altra Footwear website (http://www.altrafootwear.com/).

(Disclosure: This product was provided to me free-of-charge for the purposes of this review and is owned by me.  However, any information contained herein is my personal opinion without bias.)
Posted by Jolly Green Giant at 4:00 AM

Thanks for the review. It is an interesting looking shoe. Maybe a good replacement for Crocs and for use around camps and for river crossings. The weight given I assume is for one shoe, would that be correct? Also do you have the weight as measured by yourself for your size.

Finally one more question, how do you find the thickness of the sole. Any issues walking on rocks or stones for example?

@ AUSHIKER - Actually, the weight was for both, I'm guessing in the medium size which is what most manufacturers list. I weighed mine, which keep in mind are the largest they sell, and they come in at 413g or 15 3/4oz.

As to how they'd do on rocks, I'd say pretty well. They have a nice sole, not too heavy, not too light. I'm not sure I'd be overly eager to walk on pointy rocks because I have weak feet, but I'm not sure it would make much of a difference to the shoe. I like them quite a bit.

When walking with these, do you cease walking heal first? If so, I wonder how changing your gait back and forth from heal first (regular shoes)to sole first affects one's posture. Would it help, hurt, or neither to change footwear styles on a regular basis?

@ Taedawood - I understand what you're asking and I'm trying to find a good way to answer you. My short answer is that this is a great question for the manufacturer. In my experience it's like I became a more careful walker thereby leading with the ball of my foot versus just clomping around. I have very sensitive feet, so I would have walked the same way if I had no shoes on and needed to walk across gravel for some reason (my personal nightmare).

@ Chris - Thanks. Updated. I wrote it 8 weeks ago so I'm glad someone is looking!

Great Review! As a big believer in the benefits of the Zero Drop shoe design I'm always looking for new brands. This one looks like a keeper!