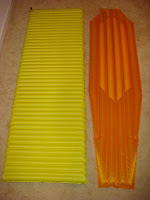 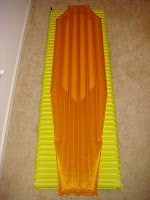 After a trip about a month ago following some night hiking where I ended up sleeping in an AT shelter out of sheer exhaustion and my complete unwillingness to set up my shelter, I decided to revisit the topic of inflatable sleeping pads because my CCF simply wasn't as comfortable as I'd like on a hard surface like the plywood floor of an AT shelter.

As a weight conscious backpacker, I did quite a bit of research as 99.9% of the pads on the market weren't at a weight reasonable enough for me to carry. I was looking for a pad 20 oz or less with "less" being the important word. I figured if I could carry two CCF pads offering twice the cushioning, twice the R-value, at fraction of the price, and at a fraction of the weight, why carry an inflatable if it wasn't sized right or had other flaws I didn't like. Course, I'd like to avoid the principal problem with CCF pads - the bulk. Because I'm a large person (6'6"/280 pounds), I needed a long and I preferred something a little wider than normal. My CCF pad is torso size, but I decided to go with a long in an inflatable pad because my back has never been comfortable on anything inflatable that isn't long as my back bends too much due to the healthy loft of an inflatable.

I ended up comparing the new Pacific Outdoor Equipment Ether Elite 6 (long) (http://pacoutdoor.com/sleeping-pads/view/ether-elite-6) against a Thermarest NeoAir (long) (http://cascadedesigns.com/therm-a-rest/mattress/fast-and-light/neoair/product). If you regularly read my blog, you'll remember an earlier post about the NeoAir and my feelings about it which ultimately caused me to return it. For the purposes of comparison, I again purchased another. Again, there are lighter versions available in the same pads, but I needed a long so the dimension and weights expressed here may be different in the same pad that would work for you.

The POE Either Elite 6 claims an R-value (a measure of insulative warmth) of 2 to 4. It varies because only the torso area has any kind of insulation, which for nearly everyone should be just fine. The NeoAir claims an R-value of 2.5 which it accomplishes though a reflective laminate on the interior which reflects the users body heat back to the user as long as it is properly inflated.

I prefer vertical baffles like those in the POE Ether Elite 6 as it helps prevent the user from falling off the sides. I have yet to understand why manufactures do anything different. The NeoAir has an internal truss system shaped of little triangles which helps support the user. I assume from an engineering standpoint, a shorter distance to distribute the weight is far more efficient than a long distance - hence the horizontal baffles.

Both pads are made well from reputable manufactures with solid and highly reliable valve systems and components. The NeoAir packs slightly smaller than the POE Ether Elite 6, but not by much. The POE Ether Elite 6 comes with a stuff sack and patch kit, the NeoAir doesn't come with either.

Comparing these two pads side-by-side is actually something that helps me appreciate the lightweight backpacking industry, the strides manufacturers are making to put forth a valiant effort, and the different body types they are forced to contend with. My body type is not the norm and this is worth noting because for my money and comfort, I think the POE Ether Elite 6 is a much better deal and designed a little better (speaking strictly of the vertical baffles) than the NeoAir. However, as a bigger person, I feel an inclination to lean towards the NeoAir principally because of the width differences which are significant. If the POE Ether Elite 6 was wider, I think I would put the NeoAir to bed for good. Unfortunately, POE doesn't manufacturer a wider product which isn't substantially heavier. Worth noting is that the POE Ether Elite 6 in width is about the same size as the standard versions of the NeoAir, so my gripe is only with the long versions.

In short, if you're looking for a new inflatable, especially if you have an average body type, are skinny, are a woman, etc., strongly consider the POE Ether Elite 6 if you want a good product at a good price.
Posted by Jolly Green Giant at 11:28 PM 15 comments:

Evernew (http://www.evernewamerica.com/EBY255.htm) is coming out with a 3.3 oz titanium stove suitable for burning alcohol, solid fuel, or wood. It should give the Titanium Ti Tri from TitaniumGoat a run for its money. The stove isn't on the market yet. The little birdie who provided me with the link also told me to expect it to arrive in the hands of fellow blogger Jason Klass (http://www.geartalkwithJasonKlass.com) shortly. I'll sit tight with you and see what he has to say about it.
While we're all waiting, please take a minute to take my two surveys ---->
THANKS.
Posted by Jolly Green Giant at 9:04 PM 8 comments:

I'm preparing for a section hike of the Appalachian Trail, but wanted to mention a new lightweight cottage manufacturer: http://katabaticgear.com/. Katabatic Gear sells lightweight down sleeping bags and bivies made of the decent fabrics and materials (Pertex and 850-down). They also sell lightweight down hoods which have turned my interest a bit in recent months. Oddly enough, I think pricing isn't too bad either. I've never tried their products nor do I know anyone who has, but I figured I'd throw it out there and hopefully get some feedback.
Posted by Jolly Green Giant at 11:15 AM 2 comments: