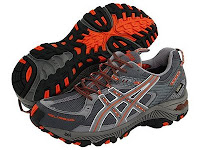 One of the things I fail miserably at is getting caught up in the hype about lightweight backpacking. When the forums start going wild and the technology police claim a new innovation, I quickly check my gear to see if I need an upgrade. If the answer is “maybe”, then the answer is really “yes”.

A few years ago, the footwear manufacturer “Inov-8” hit the market. Their design was innovative and seemed to shake a fist at industry trends which required footwear to be constructed to some overly engineered design which only made sense to non-backpacking people in marketing think-tanks. The word spread – lightweight, functional, durable, and effective – and I bought two pairs. I have used those two pairs since then for year round activity. I think Montrail, Vasque, and Inov-8’s lead the local backpacking market, at least that’s what I’ve seen.

Recently I had the opportunity to travel at bit both within the U.S. and abroad. In an attempt to cut down weight and items to pack, I started wearing a pair of my Inov-8’s “off” the trail so I could more easily transition between the cities and the wilderness in the event that an opportunity presented itself to hit the trail. This was actually a big change for me because my backpacking gear is a bit of a religion in my house. It is babied, stored privately, comes out only in special occasions, and is believed to turn into a pumpkin if exposed to situations which don’t accompany a compass. As a result, for the first time I was exposed to greater real world testing of my footwear against all surfaces great and small. What I learned surprised me – my Inov-8’s really weren’t that comfortable after all and I likely didn’t notice this on the trail because of the less hard trail surface and the brainwashing hype. Yes they were light, yes they had a good lug sole, yes they did extremely well when exposed to water, and yes they held up quite well. They also gripped slippery surfaces quite well. But the bottom line was that they didn’t have much cushion, even with the SmartFeet insole.

I started thinking long and hard about my new revelation and wondered how much more comfortable I’d be while hiking with genuinely cushioned shoes. I typically have some free mental time to think about gear and life when I run each day after work. While running recently, it occurred to me that the very shoes I was wearing to run were the most comfortable pair of shoes I owned. Asics. I first learned of Asics in college when I played Division 1 basketball. I often trained with the girls cross country team, not because I was interested in running 10 miles, but because their first seated leader was of great personal interest. So, I bought a pair of Asics and ran both after her and to stay in shape.

Cross country runners are specialty athletes much like backpackers. They too have unique gear which they swear by. They don’t wear their mini shorts or wear pasties because they are attractive; they wear them because they are utilitarian and functional. They wear footwear like Brooks, New Balance, and Asics while major names such as Nike and Adidias are left usually for people who cross train or who aren’t as emaciated. If you want to know where to find good footwear for a certain task – look to the experts who know what works best on pounding surfaces for hundreds of miles.

My point…I checked with Asics to see if they offered a Gore-Tex running shoe. I only wear Gore-Tex footwear when I hike, not because I enjoy my foot being unnecessarily hot, but I’ve learned that the environments I hike have a tendency to wet untreated shoes and personally I hate wet shoes no matter how quickly they dry. I prefer eVENT as a waterproof fabric, but no manufacturer has yet to come out with a decent pair. To my luck, Asics makes a Gore-Tex running shoe called the Gel-Trabuco 12 GT-X and I ordered a pair.

The bottom line is that the Inov-8’s in comparison felt very poorly cushioned. Also, where I wanted to hike in the Inov-8’s, I wanted to run in the Gel-Trabuco 12’s…and I knew they could handle it which was questionable with the Inov-8. Another thing I liked about the Gel-Trabuco 12's was an integrated pouch in the sewn-in tongue. The pouch enables the user to tuck the tied part of the shoelaces into it which prevents loose ends from catching to twigs - a nice option for a backpacker. Much like with any Gore-Tex shoe, the Gel-Trabuco 12 is a “hot” shoe. Especially in the summer, your feel will not be tremendously comfortable because they simply don’t breath as well as other shoes without the Gore-Tex membrane. The sole is average in the sense that I wouldn't describe it as a "lug", so it does well in most environments but might be inadequate for difficult hiking conditions. But, the good outweighs the bad and I’d rather have mildly sweaty feet good in most conditions than soaked and blistered feet which can't propel me up a hill that I'll rarely see. In short, if you’re looking for a pair of legitimate trail runners with Gore-Tex and the comfort you need – take a look at the Asics Gel-Trabuco 12…and decide whether to believe the hype.

Out of curiosity, which Inov8's did you have? I have hiked and run (trails) with the Roclite 315s for some time and am very happy with them. I agree that they are not made for concrete etc. but still find myself using them on occasion for "city life". Great blog!

Really nice alternative, I also like Goretex but lately my Goretex boots became leaky. I will have to buy new shoes soon, and these one will be on my pre-selection list.

Hey Dave, thanks for stopping by.

I've got the Rocklite 318's and 390's in GoreTex. The 318's represent the shoes I used for nearly the last two years. They are truly light, but lack a lot of cushion. Maybe I just have whimpy feet or need more cushion because of my size, but in the end the cushion provided by the Asics was wonderful.

I recently acquired the non-GoreTex Asics Gel-Trabuco WR shoes for my 6'5" 215 lb frame. They are the most comfortable trail-runners I've worn, beating out Montrail Hardrock, Merrell Chameleon, Inov8 305, and Keen Voyageur.

In my case, I'm not so concerned about water-proof construction, but I am a fanatic about cushioning, stability and grip on various surfaces.

So, another plus for the Asics Trabuco!!

Trabuco WP are the best... I've used them in all kinds of conditions running and hiking all over Alaska the last few years.

i am searching for hiking shoes and i'm definitely considering the asics. however i have a nasty tendency of spraining my ankle and i will want to go with the above ankle ones, like the gel-arata-mt-gtx.