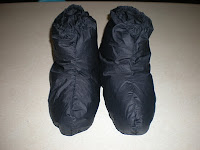 If I were to judge the most uncomfortable part of my body while trying to sleep in the backcounty, I think I’d argue it was my feet. I can’t say I was ever really truly uncomfortable, but it was the one area which I felt could use improvement. My discomfort was the fact that they would get slightly chilled about 2am and I found myself keeping them close together to keep them warm. Different socks provided different results, which again, I can’t say were all too terrible as any discomfort I experienced was always quite tolerable. But alas, I’m always looking for ways to tweak my backpacking system and find components which are as top notch as possible to ensure I have the greatest likelihood for comfort and success.

My sleeping socks started with a pair of Expedition REI socks. They were warm, but entirely too bulky and heavy. I then started using a second pair of my standard hiking sock, which for me, is the “Darn Tough” brand (http://www.darntough.com/). After several trips, I decided this was a bit overkill and still too heavy. I ended up wearing a pair of Possum Down socks (http://productsfromnz.com/browse_1129_2) which I had imported from New Zealand. They weigh nothing and aren’t meant for hiking, but work fine for my 3-season sleeping needs.

In the winter I considered an insulated bootie. I actually had a pair of Nunatak Teanaway booties (http://www.nunatakusa.com/site07/booties/teanaway.htm) custom made for me, but ended up returning them when the weight listed on the website was nearly twice as much as the pair provided to me. If you’re looking for a bootie, the Nunatak Teanaway, when made correctly, is the lightest pair I know. Because I had a bit of a gripe against Nunatak after waiting for nearly 3 months for a product that didn’t work and because I didn’t want to pay for a heavier pair from Feathered Friends or a mainstream company, I decided to give the Integral Designs Hot Socks (http://www.basegear.com/integral-designs-hot-socks.html) a try. They worked fine, but I can’t report an overwhelming difference between that and other pairs of socks with decent insulation.

One of my recent purchases was a down hat from Black Rock Gear (http://blackrockgear.com/). This was another unique piece of gear which I hadn’t seen on the mainstream market. After verifying the quality of construction and materials, I suggested to the owner that he start making down socks as it was an item I hadn’t seen in the market yet and would make a great product between regular socks and full blown booties. He agreed and said it was something he was going to start working on in 2010.

The idea of down socks has been in my mind since this conversation and I couldn’t help but wonder if it would ever become a reality. I’m someone who appreciates innovation, but generally lack the engineering and manufacturing experience to do things myself. As such, I often need to rely on others to make things I’d like to see. As I was waiting for Black Rock Gear, an individual came forward on Backpackinglight.com to say he just made himself a pair of down socks and offered to make some for others. Seeing my window, I jumped on it. As the orders quickly took off in a matter of days, the owner started his own website “Goose Feet” (http://www.goosefeet.webs.com/). He constructed his down socks from Momentum 0.9 oz Taffeta and he uses 800+ premium goose down fill. The weight of the socks is quite ideal when compared in a weight to warmth scenario with other options. The socks run $55 and weigh 2.0 oz in an extra small, 2.1 oz for a small, 2.2 oz for a medium, 2.3 oz for a large, and 2.4 oz for an x-large. If you weigh whatever socks you sleep in, I think you’ll realize that these down socks are likely lighter and substantially warmer. Keep in mind, they are meant to be worn only as warming socks, so this isn’t a product which you’ll be able to walk on when in camp. They should be considered as an option between a good sock and a heavier down bootie.

After ordering, I assumed the product I would receive was going to be clearly identified with amateur craftsmanship and frayed edges. To my surprise, they are as professional in appearance and construction as anything else on the market. With top notch components and reasonable pricing, this is another one of those pieces of gear which I highly recommend to add to your growing gear closet.

Posted by Jolly Green Giant at 3:19 AM

Email ThisBlogThis!Share to TwitterShare to FacebookShare to Pinterest
Labels: Down Socks

Hi
Thanks for yor notes abt down socks.
Since some years ago I have problems with cool feets. Both daytime and nighttime. Will try this kind of socks to make my outdoor nights warm and cosy.

I've been using a pair of PHD Minimus Down Socks for a bit now - mine are around 104g as I take the XL size. I'll be carrying them until the summer - utter luxury.

Good point Phil. I had completely forgotten about PHD after I asked them to make me a pull over in XXL and a quilt (both were declined as too much work, although I've heard they may be offering a top bag this year). They make good stuff, so I'm guessing your socks are quite nice. Thanks for reminding me of the stuff across the pond.

You really have a talent for finding great unique gear! Thanks.

@Robin...Thanks, although my wife would phrase it as I have a talent for wasting money :)