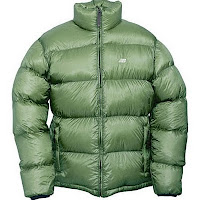 The blogs have been a bit active lately regarding an 850-down goose fill jacket called the “New Balance Fugu”. A little over a year ago this jacket was compared by Richard Nisley in warmth to various offerings from Montbell, several fleeces, and other warming layers. The Fugu was significantly warmer than all of them. The jacket was supposedly being sold for $250-$450.

The problem is, no one could find one (at least I couldn’t). Unfortunately, New Balance wasn’t known for making apparel and it appears as though they got in the apparel business and then got out quite quickly. After making an effort to find one, I eventually gave up when I simply had no luck and I assumed the product was never to resurface again.

Last week there was a positing on Backpackinglight.com that RecreationOutlet.com had their hands on some of these jackets and were selling them at a considerable discount ($119). I purchased one…and was completely amazed because it was exactly what I was looking for. In an XXL, it was sub 16 oz (a medium is 13.5oz) and easily put to shame pretty much everything else even close in my gear closet. It was made well, extremely warm, and the price was very right. This past October I put an order in for a Nunatak Skaha down pull-over. I felt so confident with the Fugu that I cancelled my order for the Skaha as the savings of roughly 4 oz wasn’t worth the $400 price tag. You can find the Fugu at: http://www.recreationoutlet.com/p-435-new-balance-fugu-down-jacket.aspx.

There are a couple of things I love about this jacket. First, it fits up and around my neck nicely with significant loft. My neck, specifically those big ole blood pumping arteries which help keep my body warm and my pea brain functioning, is something I want to keep warm. Second, it has pockets that are actually useful and actually warm. I also love the fact that it has drawstring adjustment around the waist which is where some UL manufacturers often drop a little weight (i.e. Montbell). One unique feature is that it has a radiant barrier on the interior of the jacket to reflect body heat back to the user. This is a very unique and interesting piece of engineering which actually works. New Balance claims it provides an additional 4.6 degrees of warmth, but other tests have indicated it is actually more. The jacket also comes with a heavy DWR treatment similar to the manufacturing process of Epic which will help tremendously with a light rain and snow. Basically, it’s very well made and my only gripe is that the sleeves are a bit short, but it sure is nice that it comes in regular and tall sizes. Another important factor if your trail name is Jolly Green Giant is the fact that it comes in green. Now that makes it pretty much perfect in my book.

A word of caution, this is NOT the same jacket being sold by The Sportsman Guide. Consequently, Recreation Outlet has a mixture of the Fugu and a jacket that looks just like the Fugu. Be very careful that you don’t get sent the wrong one by mistake. The differences between the two jackets are fairly obvious. First and foremost, the Fugu will never weigh more than 16 oz (the imposter will weigh twice this). Second, the Fugu does not have fleece in the collar. Third, the zipper on the Fugu works, the other one is very poor. Fourth, the Fugu has an interior pocket clearly marking it as a Fugu jacket. The differences in these two jacket is not only appearances and weight, but also fill. The imposter uses an 80/20 ratio of down and of lesser quality. Buyer beware. Recreationoutlet.com has pledged to get you the correct jacket if by some reason you get the wrong one. If you aren't impressed with it as soon as you touch it, then you have the wrong one.

Posted by Jolly Green Giant at 4:19 AM

You haven't steered me wrong yet so I just ordered this jacket. It's a cold winter this year so I'm able to convince myself I need this (I guess may MH subzero jacket just won't do anymore).

Looks amazing! Ordered one using Via Address as they don't ship abroad. Very very excited, thanks for the heads up.

How small does it compress down to?

Went down to the store and tried one on. Too bad no women's model but it fit pretty good. The collar and the pockets were the real seller on this item for me. I went with the longer sleeves, they were kind of short even for a men's jacket.

@ Marx - My XXL compressed to a little smaller than a volleyball. Keep in mind, it has a LOT of down.

Im 5´10" and 165 lbs with a 41 inch chest... I am a big fan of my Montbell gear and jackets, but the medium size is VERY snug in the chest and shoulders- making me consider getting a large the next time.

Can you advise whether this jacket is sized big or small? Does it accommodate some layering underneath, or is it totally fitting like Montbell?

The cut is roomy enough for layers. It's a great jacket. You should be able to buy your normal size with no concerns. I agree Montbell is snug. The Fugu is more American cut.

Bought two, one for me, one for my wife. Took them to Chile this winter. Fantastic. I'd say ours compress smaller then a volley ball. Mine (XXL) weighs 15.2 oz. Only gripe: zipper snags easily on the little flap.