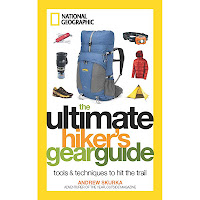 I have a tendency to write my blogs several in a row and weeks in advance, releasing them on set dates to spread them out.  Regrettably, the time I once had to devote to this blog on a daily and weekly basis has been snatched out from under me by the demands of a very challenging professional position and the welcomed personal position of being a father to two wonderful sons.  With that said, this week my review for Andrew Skurka’s “The Ultimate Hiker’s Gear Guide” book was supposed to release ($13.29 from Amazon).  I guess I shouldn’t be surprised that there are so many reviews about his book as it just came out to the masses even though I got an advanced copy a few weeks ago.  Guess I should have timed my release better.

Most of the lightweight backpacking community is aware of Skurka who really came on the scene only recently.  In a very short time he’s logged more than 30,000 miles principally on long-distance hikes of the Appalachian Trail, Pacific Crest Trail, Continental Divide Trail and several other trips which are lesser known or that he essentially named himself like the Alaska-Yukon Expedition.

Skurka’s book rehashes many of the same sentiments that other lightweight backpacking books already covered quite thoroughly.  I think the difference is that Skurka seems to be a little more genuine and transparent.  For example, most of Ray Jardine’s books make it sound like he never got sweaty, never got wet, never had bad weather, never had a poor campsite, never had failures or injuries, etc. and that he had everything figured out long before his journey started.  I also found that Skurka's book focused more on the type of gear he used to be successful and he didn't unnecessarily throw out too many gear specifics because he knew full well that anything specific mentioned today would likely be nearly irrelevant tomorrow (the Achilles's heal for many backpacking gear books) .  Skurka’s book is written in the same spirit of experience, but his words carry less of an attitude, less of a “my-way-or-the-highway” mentality, and instead he seems to simply be telling readers what he’s learned.

I’ve personally never met Skurka, although I’ve read a lot about him and watched many virtually unknown videos of him.  I find him very likable, passionate, trustworthy and creditable.  My personal impression is that writing this book was likely a bit out of character for him, although a means to continue to thrive as a professional backpacker and guide.  From my observations he’s a fairly quiet guy, someone who keeps to himself to a certain degree.  He seems to prefer hiking alone which although solitude is helpful in many aspects, for him I suspect it as much out of convenience and schedule as it is out of the real fact that few people would be able to keep up with his super-human-backpacking-Olympian-pace.  His professional speaking engagements are cheerful, but reserved, and I’m guessing they weren’t his first choice to fill his schedule as I've never felt like he needed to seek attention to find solace in his choices.  He speaks reservedly, but with a clear Duke education and a matter-of-fact tone that is neither snobbish nor judgmental.  Simply, he speaks to what he knows and his book isn’t much different.

Few things jumped out at me from his book principally because many of the techniques had already been mentioned elsewhere to a certain degree.  But to his credit, I didn’t get the sense that he was trying to force-feed the “light is right” mentality.  For him, it was a matter of practicality.  He wanted to move fast (and was quite successful at that), so he simply carried the gear he thought he needed and was the most reasonably affordable option with decent performance.  It was clear as his experience grew, he wholeheartedly admitted that knowledge and skill was far more important than anything in his pack.   As someone without a conventional job, it was clear he was mindful of gear choices as it relates to his income.  He purchased what he could and attempted to get gear provided by sponsors for everything else which is distinctly different from being a biased and compensated spokesman.  He didn’t bathe himself in cuben fiber, nor was he concerned about saving ounces here and there by making things less functional than they could be if he felt he needed them.

Skurka started off his book by trying to define two types of hikers:  those who seek to cover a lot of ground to experience as much as they can and those who infuse the hiking experience with other desired activities such as camping, bird watching or backcountry cooking.  He easily admitted to being far less concerned with camping, sitting around, and doing much of anything other than getting up early, hiking as far and as fast as he could comfortably, and bedding down only at the last minute.

I appreciated how he unconventionally embraced fleece in certain situations because it remained somewhat warm when wet (a very likely occurrence for sweating backpackers) and that it was significantly less expensive and more widely available.  I liked how he championed the fact that there was really no ideal rain garment on the market as backpackers exert too much effort and will eventually soak themselves from sweat even if they are able to mitigate outside elements.  I always get a chuckle when I see debates about eVENT, Gore-Tex, Hyvent and others as it all seems so senseless to me because none of it really matters.  I’ve spent entirely too much money coming to this reality.  Skurka talked about some details that others rarely do, such as the importance of swapping out shoes and even CCF pads because they do retain their crushed position after a period of time and don’t perform as well.  Like others, Skurka supported the use of tarps in most conditions as they offered the most function and breathability, not to mention they were lightweight.  For those who haven’t seen Skurka’s video on making a cat food can alcohol stove, it is well worth the watch and of no surprise it was his stove of choice more often than not.  I personally usually use Esbits which is more costly but lighter and smaller for someone like me who isn’t looking to trek 3,000 miles.  Sure enough, when I do use alcohol I use a cat food can I made myself based off of Skurka’s video.  Skurka was unashamed to admit that chocolate had become one of his principal food fuels and I got a kick out of his honesty when he said he wanted his spoon to resemble more of a shovel considering his need for food (fuel) and the fact that he made camp so late that eating was a last minute priority which required a very little amount a devoted time.  He too was a supporter of liquid water purification, but used tablets in winter because they wouldn’t freeze even though they were more expensive.

I view books like this as a bit of a novelty because the lightweight backpacking movement is still fairly new.  I intentionally financially support backpackers like Skurka and others who make videos as it both helps me mentally travel to places I’ve never been and I enjoy having some minor influence of fueling the passion of those willing to push away from a desk and do something other than waste their lives away.  Hopefully you will have a similar experience.

Happy reading.
Posted by Jolly Green Giant at 3:26 AM

I really enjoyed...enjoy Andrews book. It has a sacred spot on my niteside table and I dip into it every night. This review of Andrews book is true to its word in everyway. Not pushy on what to have or get but the thoughts behind what you need and why. A great resource for the neopyte or expert both.