In as much as possible, I pride myself in blogging about unique gear.  For example, I delayed a recent article about my Jet Boil Sol Ti because I felt it has been written about more than enough times elsewhere and even I found the topic annoying.  Personally, I like to focus on unique gear and things that work for big/tall people since I’m in that club. 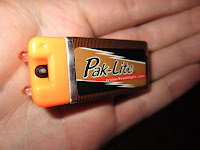 One item I recently came across in my gear closet is something that has been around for roughly 15 years, yet most have never heard of it.  I’m referring to the PakLite, a simple and lightweight flashlight that sits on top of a 9V battery and can burn (on a Lithium battery) for up to 100,000 hours.  It often finds itself in the hands of emergency kits for our military personnel and others like you and I.

I first learned of PakLite when I was reviewing Joe Valesko’s Gear List for one of his long hikes.  I have a ton of respect for people like Joe who “do” versus just talking about backpacking and I have a tendency to pour over gear lists of people of similar disposition because I value their experience and insight.

If you visit the PakLite website, you’ll find a variety of color and burn time options in addition to whether you want one light or two.  Their Basic model runs for 20 hours, the Super for 30 hours, and the Ultra (the Lithium version) for 1,200 hours.  The marketing spin for “up to 100,000 hours” is likely in the most ideal conditions which you won’t experience, but their claim of it lasting for 10 years is probably realistic for most of us.  Oddly enough, their marketing claims the product “works in sub-zero temperatures” which is always good to know.

The weight of the light itself is negligible, but the 9V battery is not.  Together they weigh 1.6 ounces which is lighter than most headlamps.  You can even buy a head strap if you want, although the site seems to push a Velcro/hat attachment likely because with the strap the weight becomes comparable to a standard headlamp and I’m guessing most people would rather have something more attractively designed than a rectangular battery hanging off their head.

As you can envision by the picture, the LED portion simply snaps on to the battery leads.  The Ultra version I have was desirable to me both because of the long-term lithium battery, but also because the cap was orange, it glowed in the dark and had a high/low setting. 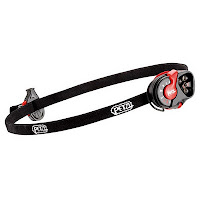 So why do I have it?  Well, I’m a huge fan of the Photon Micro-Light II LED keychain flashlight.  It weighs nearing nothing (6.2 grams), costs less than $12, and has a solid run-time of 12 hours or so.  Because it comes in a variety of colors, and because it is so light, it’s not unrealistic to carry, for example, and red and white light – one for reading and one for walking.  It is my “go-to” option for 3-season hiking in most places.  After I figured out the Micro-Light was brighter than my Petzl eLITE, lighter, and less expensive, it was a no-brainer to make the switch.  But in winter months, when the sun disappears so early, it is nice to have a more robust light and one that lasts longer.

The “low” beam of the PakLite is about as bright as the Micro-Light.  The “high” beam completely drowns it out – no contest, and it's arguably as bright or brighter than other headlamps I own.  I is not as bright as AAA or other fancier mini-flashlights however.

If you’re in the market, check it out, but don’t expect anything more than a 9V batter with a small LED on top.  Nothin’ fancy.

Posted by Jolly Green Giant at 3:34 AM